skip to main | skip to sidebar

How can women grow and develop as leaders within the church?

And there's a great article by Jenny Baker (founder of the Sophia Network) here.

Plenty of food for thought and ideas here.

Posted by CPAS Women in Leadership at 02:59 No comments:

In Christian history, women have often been portrayed in a bad light. I'm so grateful to those women and men who have re-told the stories, and drawn our attention to so many women who have been passed over or misrepresented.

But there are some women who were just bad - and there's not much from their stories which can be redeemed. I recently decided to avoid preaching on the 'John the Baptist's head on a platter' story. But was interested to read an excellent reflection on Herodias and Salome, on the Big Bible Project website (also an excellent place to go for bible resources).

Mentoring is clearly flavour of the month across the pond as well as in UK.

CPAS is promoting mentoring, and running training courses for and within dioceses. And mentoring is one of the themes of the latest bulletin from Gifted for Leadership.

Gifted for Leadership is a regular email for women leaders from the company that produces Christianity Today. The article introduces mentoring, and there are a whole host of ways of understanding and defining what mentoring is, how to mentor, and how to make the most of being mentored. But for a starting point it may be worth checking out.

There are also two articles on the CPAS women in leadership site. Click here and scroll down to find and download them.

Being a mentor is a great way to help and encourage others in leadership. Being mentored is a privilege - someone to walk beside you, and both challenge and encourage.
Posted by CPAS Women in Leadership at 06:50 1 comment:

I recently watched the film Made in Dagenham. It was a good reminder of how far women have come since the 1960s.

Was it only then that women had equal pay - or began to have equal pay? We'v come a way since then, but still far to go!

And while women still find life very unequal, the Church is too often on the side of inequality, in the mistaken belief that it's God-given. The idea that God made men and women for different 'roles' in life.

The organisation Theos is organising a conferernce on 22nd May: 'What women want'. We've had a book of that title, a film even - though hardly enlightening! This looks like a serious attempt to help the Church engage in issues of concern to women. So worth getting involved?

'It has been said women make up half the world’s population, yet do two thirds of the world’s work, earn one tenth of the world’s income and own less than one per cent of the world’s property. Has the time come for the Church to step forward and take action on issues such as gender equality and women’s rights to challenge the power of men? Join us as we debate, consider and discuss the issues surrounding women’s empowerment in both the UK and throughout the world.'

I was intrigued and perturbed by the reading on 5th February from Mark chapter 1.

It was one of those 'in passing' moments, where one thinks, 'Wait a minute!' Simon Peter's mother in law was healed by Jesus, and then got up to serve him and his friends.

I'm not sure I've ever heard a sermon on this episode, but I was delighted to see a recent post from Nancy Wallace, via the Big Bible project. You can read the rest here:  http://bigbible.org.uk/2012/02/strengthened-to-serve-simon-peters-mother-in-law/

And as so often, when we read about women in the New Testament, there is more than meets the eye!

Posted by CPAS Women in Leadership at 02:42 No comments:

Labels: Women in the Bible 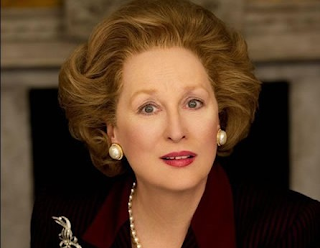 For years Margaret Thatcher has been held up as a model of a certain kind of woman leader.

One which most women don't want to emulate. She has singlehandedly given rise to a stereotype of woman leader: the 'Iron Maiden' - see Stead and Elliott, 2009.

Yet the film released last week seems to have confounded her critics.

Meryl Streep is an astonishing Thatcher, convincing in both hairstyle and voice. What sounded like a bizarre way of structuring a film, around a person's mental decline, has turned out to make sense.

Like many other women I have long pondered whether Mrs Thatcher did women many favours when she became Prime Minister. She seemed so unlike most women. Yet this film has made me rethink. It reminds us she did not have much choice in that era but to behave like a man. And perhaps behind the persona there was more of a real person than most of us realised.

There is a good review of the film on the Sophia Network website, and resources available from Damaris. It will be interesting to see what discussion it generates about women leaders.

The Iron Maiden stereotype seems to reinforce the idea that 'real' women can't be leaders. Femininity is inherently not suited to leadership.

But a human 'Iron Lady' might force us to think differently.

Posted by CPAS Women in Leadership at 01:43 No comments:

Are you an influential woman? 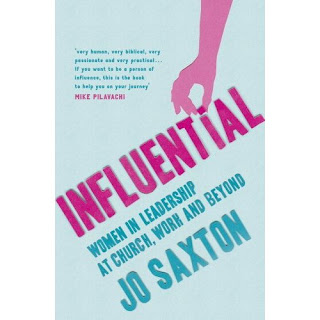 I'm reading a great book at the moment: Influential, by Jo Saxton.

The subtitle is 'Women in Leadership at church, work and beyond. Starting to read with high expectaions, I was encouraged by some words in the Foreword by Michelle Guinness, who expresses what I think many Christian women feel:

'How do we stay on the see-saw, balancing feisty, outspoken leadership with Christian grace and love?' It's a challenge, when the assumptions about what 'leaders' are like can often conflict with stereotypes of how women are supposed to behave.

Jo comes from the rising generation of women leaders, who speak at festivals such as Soul Survivor and Momentum. She seems to have left the UK and is living in the US but I hope that this book will speak to the new generation of women who see gender equality all around them but then find that in the church it is somewhat different.

Written in an accessible style, Saxton explores biblical role models such as Miriam and Deborah, New Testament women, and what the difficult passages in Paul's writings are getting at. 'What did women do?' She asks.So what should women be doing today?

I've been enjoying the book, and though I have read a few on this subject before, this is a fresh approach, Saxton quotes a number of women leaders in the church today, and there are plenty of action points and good advice woven into the chapters.

If you want an all-encompassing book which will encourage you in your leadership in the church - and beyond - this is definitely worth reading.
Posted by CPAS Women in Leadership at 03:34 1 comment:

CPAS Women in Leadership
News and resources for women leaders in the church. This blog is edited by Rosie Ward.

Click here to send an e-mail to CPAS Women in Leadership: CL